Currently #6 on Netflix’s Top Ten list, Just Go With It is becoming popular once again. Originally released in 2011, this film stars Adam Sandler and Jennifer Anniston and runs an hour and fifty-six minutes.

After a painful wedding-day divorce, plastic surgeon Daniel Maceby pretends to be married for many years. Once he meets the “perfect girl,” he hires his assistant Katherine to pose as his wife in order to keep up this act. His new girlfriend, Palmer, played by Brooklyn Decker, decides it would be a good idea to take Katherine as well as her children on a trip to Hawaii in order to get to know them. Daniel, Katherine, and the kids must act as a family in order to keep Palmer from discovering Daniel’s truth. The two find out many things about one another on the trip, leaving them with a surprising realization.

As most of the films that Adam Sandler stars in, this movie was produced by Happy Madison Productions and Columbia Pictures. It was one of the first movies that Griffin Gluck starred in, leading to a very successful acting career. It also stars Bailee Madison in the early days of her career as well.

Although it received only a 19% rating on Rotten Tomatoes, I’d give Just Go With It a solid 73%. It may not be the best of Adam Sandler’s movies, but it is a good movie that can be watched over and over. 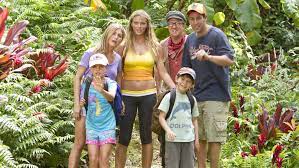