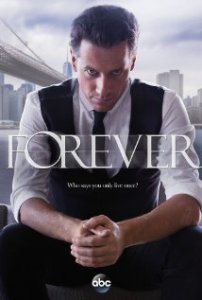 ABC released a new TV series “Forever” a couple of weeks ago. The show is set in New York City and follows the character Dr. Henry Morgan, a medical examiner who is also incapable of aging and dying. He has been alive for over 200 years, his first ‘death’ taking place on a ship transporting slaves to America. Another main character is NYPD Detective Jo Martinez, who Henry partners up with frequently, as he has seen many of the same cases before in his long life. He notices the inconsistencies in suspects stories and is quick to tell the detective everything he knows on the subject, leaving her questioning how he knows so much.

In a recent episode it was revealed that he was a British soldier in World War II, where he met his future wife, Abigail, over in Germany and soon adopted an orphan baby from a concentration camp. His wife died years ago, and Abe, the orphaned boy,  is now in his sixties, and is the only other person who knows about Henry’s immortality.

Henry also is being stalked by a mysterious man who goes by Adam, because he has “been here since the beginning”. He claims he is suffering from an endless life too. His life has lasted over 2,000 years, and he is also searching for a way to end it. Adam frequently calls Henry from right across the street, commenting on some of Henry’s recent cases and what Henry is doing at the exact moment, meaning that Adam is watching Henry at the time of the phone call. Henry doesn’t tell anybody but Abe about the stalker, and Abe convinces him that involving the police will lead to more problems. Adam begins making threats against Henry.