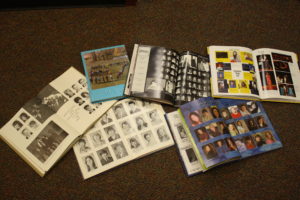 Homecoming is just around the corner.

“I hear a long line of proud history and traditions that has brought two communities together into one,” high school principal Jason Tokar said. “ When I was in school it was different. “There were great athletics but education was definitely old school.”

Tokar said today’s education is more based on “can you fix this problem?” He would like a cutting edge high school and he thinks that 50 years of excellence fits Ovid-Elsie very well. He would also like to stay on the front of getting students ready for the SAT test and college.

“We have had people come back after years of being out of school come from all over talk about how much the school has changed and talk about how different the school is now since they were in school,” Latz said.

“It takes a village to raise a child parents have done well at raising their children,”Latz said.She thinks that with the following support of the parents the school district can continue with another 50 years of excellence.

Both Latz and Tokar think that Ovid and Elsie coming together is a good thing.