When I watched the movie I loved it. My favorite part of the movie would be the music. I think the music really makes the movie for what it is the music makes the movie more mysterious and entertaining and the music also adds feeling and helps us understand the feelings of the characters a little better.

The actors and actresses really do a good job of portraying the feeling of the roles they are playing. My favorite part of the movie would be when Christine gets her night in the spotlight and everybody finally gets to hear her amazing voice. 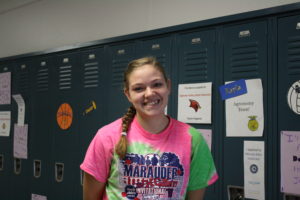 Amber Surinck tells us about her favorite movie. | Photo by Madison Schneider.

The actor playing the dark and mysterious phantom with the bad past who also doesn’t know how to feel did a very good job at convincing me that he was the phantom. The actress that plays Christine’s role has a fantastic voice she hit every note perfectly. The actress also did a good job of portraying the feeling of the character just like the phantoms actor. Christine’s father had passed away a while ago and he told her the angel of music would gift her. Her father was a very important figure in her life and the actress shows the pain and hurt as if her own father had passed away. I really liked this movie everything was described in great detail.

The background of the whole movie really brought out the opera it was absolutely stunning from the red to the seats to the gold of statues and let’s not forget the chandelier. In my opinion I think that the whole outlook of the movie is great I recommend this movie to everyone although I do understand not everybody likes musicals.