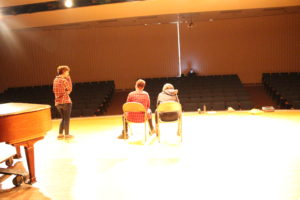 Many students gather in the auditorium during sixth hour for Drama class. This class is new to O-E this year because enough students signed up for it to be part of the seven-hour schedule, and now they are working on the schools first official show, 10 Ways to Survive a Zombie Apocalypse, and it is about exactly that.

“Last year we did Twenty Seven Reasons Not to be in a Play, where the scenes are all split up. This is a lot like that, but it’s only going to be ten ways.” said Junior Dawson Coldiron. The last play had the same set of characters coming and going off the stage to signify a new scene. The lights would go out, and then when they came back on the next scene would start. The audience can expect the something very similar this year.

The cast gets to together at the beginning of class to discuss the practice from the day before, or about how he set and props are coming along. When the teacher yells in excitement, “the bloody hands are here,” and everyone in the class jumps for joy, you know you’re in the drama class.

“We have one scene that is Kung Fu, and we choreographed the fighting and the music and we go through that.” said Coldiron, “It’s a very fun scene.” All of the students have a favorite scene but this one came up the most when they were asked. It’s a funny scene about fighting zombies with the power of karate. This show has many other methods of fighting off the vile creatures but this method will be a crowd favorite for sure.

Although scenes aren’t always the best part for the actors, instead, what they are doing. Freshman Lillian Ackels said her favorite part is, “dragging my dead body across the floor.” Referring to the one zombie that can’t walk in the play.

The instructor is very excited about this play. Mandy Bashore is the teacher for drama and choir. She can’t wait for the school to see her pupils in action. Bashore said there are many reasons for people of all ages to see the play. Her student, Junior Jordan Nethaway said, “because one it’s funny, two support us, and three who wouldn’t want to see a play by us!”

With reasons like that, what is stopping you from buying your tickets now?