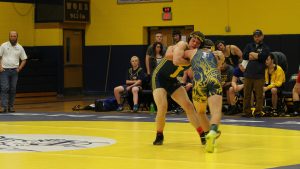 On February 14th, four Ovid Elsie Marauders made it past districts at Alma High School and into regionals.